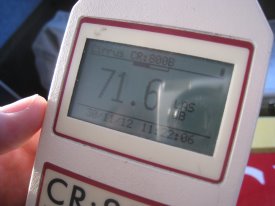 David Greening has been involved with the Recreational Craft Directive since before its inception on the 30th June, 1998, when David was responsible for Recreational Craft Directive compliance for the Bowman and Starlight range at Bowman Yachts and then went on to repeat the process for the Southerly, Fisher and Vancouver ranges at Northshore Yachts.

Since then he has worked as a Recreational Craft Directive consultant for a wide variety of craft, ranging from Cornish Luggers, RIBS, Sailing Yachts and Luxury Powerboats.  In many cases working for owners and some of the UK’s leading designers and boat builders.

He has a working knowledge of the Directives and the numerous supporting International Standards (ISOs).  As a qualified Naval Architect he can complete the stability assessments and structural analysis which form a significant part of the RCD compliance procedure.

Areas in which David can advise include;-

“The Recreational Craft Directive can appear to be daunting, not only is the law complex but its application requires a working knowledge of the supporting International Standards, my aim is to offer customers a turnkey one stop shop”

If you would like a quotation for David Greening to carry out a Recreational Craft Directive consultancy please use the “Get a Quote” link.

What is the Recreational Craft Directive (RCD)?

The RCD is a legal requirement in European Member States (EEA). Recreational craft must conform to the Essential Requirements (ERs).  It is good for consumers since it details the minimum acceptable standards for design and construction of recreational craft.  Manufacturers also recommend design categories and maximum recommended loads which can be found on the builder’s plate.  It is suggested that some caution is exercised when applying Design Categories, as the user’s experience and skill must also be considered.

What is the Amending Directive?

The Amending Directive was introduced and consolidated with the Recreational Craft Directive on 30th June 2004, however most of the additional requirements of the amending directive did not become mandatory until 1st January, 2006.  This guide has been updated in order to reflect these changes.

Which boats need to comply?

All recreational craft of between 2.5m and 24m which have been put onto the market or into service in the European Community (EEA) since 16th June, 1998 and that are not exempt.

What are there exemptions from RCD compliance?

The main exempt craft include;

Who is responsible for compliance?

The company or person first placing the product on the European Market (EEA).  Putting into service is considered to be the same as placing on the market, so a boat brought into the EEA from outside should be CE marked by the importer.

Therefore if you are considering purchasing a craft from outside of the EEA for import you are strongly advised to check that a craft is compliant prior to purchase and also to factor in the RCD compliance costs into your budget.

What are the builder’s obligations?

The manufacture must satisfy these requirements even if using a self-assessment module.

How do I know that a boat does comply?

The most important document is the Builder’s Declaration of Conformity.  However if you are looking at boats for purchase, good indicators are having a valid HIN number at the starboard side of the transom, a builder’s plate with a CE mark near the steering position and an owner’s manual.  Usually the Builder’s Declaration of Conformity is appended to the owner’s manual.

What happens if a boat is not CE Marked?

What is a Notified Body and what do they do?

Notified Bodies are Government appointed organisations that will verify technical information provided by the manufacturer before issuing EC Type Examination Certification or authorising the builder to affix the Notified Bodies distinguishing mark on the builder’s plate.

A Notified body must be involved in Design Category A, B or C [craft over 12m] assessment and also to issue a report for all Post Construction assessments, however builders may self-certify Category C and D assessments for craft under 12m.

What boats need to comply with noise emissions requirements?

Essential requirements for noise emissions of propulsion engines were added by the Amending Directive.  Since this topic is complex, the following advice is only intended for one-off assessments.  It is worth seeking an expert’s advice if it is unclear whether the installation being considered complies or if you are a series production builder where a boat family approach might be considered.

All craft with a Froude number of less than 1.1 and a Power Displacement ratio of less than 40 are deemed to comply with the noise requirements.  This means that most displacement craft including sailing yachts are likely to comply.  However these calculations must to be certified by a Notified Body.

If the craft has an outboard motor or an engine and sterndrive with an integral exhaust, these should have been tested by the engine manufacturer.  The sterndrive should be CE marked and a Certificate of Conformity should be supplied with the engine.

If the outboard motor or engine and sterndrive installation were offered to the market or put into service in the EEA prior to 1st January, 2006 then it does not need to comply.

If the installation is not in any of these three groups, then an on the water is required.    This can be arranged and will require notified body involvement.

What boats need to comply with exhaust emissions requirements?

Essential requirements for exhaust emissions of propulsion engines were added by the Amending Directive.  If the engine was offered to market or put into service in the EEA prior to 1st January, 2006 then arguably it need not comply with the exhaust emission requirement.

However the RSG and Notified Bodies do not share this opinion and it is strongly recommended that written advice is taken from a Notified Body prior to the RCD process for any craft with an engine that is not CE marked and/or has not been supplied with the appropriate engine manufacturer’s Certificate of Conformity.

If these requirements cannot be met, testing is likely to be required which may prove difficult and expensive.

A.    OCEAN: Designed for extended voyages where conditions may exceed wind force 8 (Beaufort scale) and significant wave heights of 4 m and above but excluding abnormal conditions, and vessels largely self-sufficient.

C.    INSHORE:  Designed for waves of up to 2m significant height and a typical steady wind force of Beaufort force 6 or less.  Such conditions may be encountered on exposed inland waters, and in coastal waters in moderate weather conditions.

D.   SHELTERED WATERS:  Designed for voyages on sheltered coastal waters, small bays, small lakes, rivers and canals when conditions up to, and including, wind force 4 and significant wave heights up to, and including, 0.3m may be experienced, with occasional waves of 0.5m maximum height, for example from passing vessels.

Declaration of Conformity; certifies that the craft meets the Essential Safety Requirements.

Note that for the purposes of exemption to the RCD it is the status of the country at the time that a craft was in that countries waters that applies.  This list does not detail when a territory was admitted to the EEA, in which case advice should be sought elsewhere.

The Channel Islands, Isle of Man, Gibraltar and Hong Kong are not within the EEA.

Essential Requirements (ER);  these are based on a comprehensive list in the RSG Guidelines, compliance can normally be demonstrated by applying a relevant harmonised standard (ISO) or equivalent.

Imported Sportboats (Power);  A large number of sportboats are being imported from the United States of America in the 1990’s and 2000’s, this became particularly popular due to favourable dollar exchange rates.

Prior to 1st January, 2006 RCD Compliance could be self- declared as a Design Category C craft, however from 1st January, 2006 all imported craft from outside of the EEA using Post-Construction assessment have to engage a Notified Body. In addition many planing craft are required to meet the sound and exhaust emission standards.  This may prove impossible with the original engines.

Caution should be exercised when buying any craft that originates from outside the EEA, make sure that it has a valid Craft Identification Number (CIN) at the starboard upper corner of the transom, Builder’s Plate with a CE mark and notified body number displayed in the cockpit, and has an owner’s manual including a signed Builder’s Declaration of Conformity or a Post Construction Certificate.

Notified Body; is an organisation that has been accredited by a Member State to assess whether a product meets certain preordained standards. Assessment can include inspection and examination of a product, its design and manufacture.  A notified body cannot produce either fully or partly, a Technical File or an Owner’s Manual.

Owner’s Manual; includes details of the craft and manufacturer.  Loading and design category information and guidelines as to the safe operation of the craft and its systems, as may be requires by the ER’s.

Technical File (TF); the manufacturer is required to complete and retain technical documentation which demonstrates a yachts compliance with the RCD.