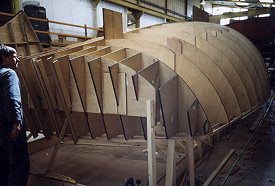 Although most of his work is in completing Marine Surveys, MCA Coding and Recreational Craft Directive consultancy, David also completes 3D modelling of hulls using the Autoship® suite of Naval Architectural software.

David has developed some effective methods of transferring traditional lines drawings into a digital format, which can then be used for the production of stability books or for production modelling including plug design.

Stability Books for MCA Coding or RCD Compliance can also be completed as well as carrying out inclining tests.  David has a set of test weights which are good for craft up to 50ft (15.2m).

“I can offer support for as much or as little as my clients may require, this could include 3D modeling and providing a set of nesting drawings for laser cutting, which would then faciltate stability modeling and a structural assessment later in a project.”